9-year-old dog Shvabo and his 11-year-old friend Rocky lived together all their lives, but the owner was forced to give the pett services of animal shelter due to problems with the landlord. 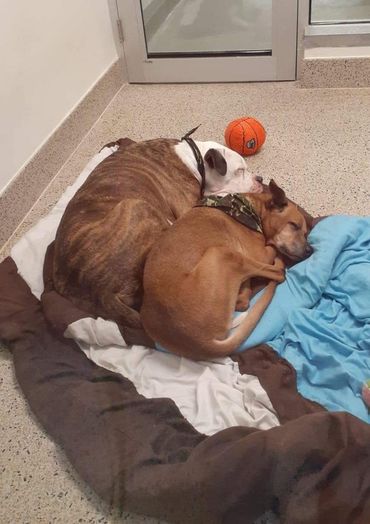 The arriving dogs had to be temporarily separated: Rocky went to the floor where the animals available for “adoption” were kept, and Shvabo was placed in a medical center – due to arthritis, the dog was limping and needed the help of a veterinarian.

Shvabo took the separation hard. He missed his family and home very much, and especially his friend Rocky. For days on end, the pit bull howled, tearing the hearts of the volunteers who watched the dog through the glass railing. Shvabo looked very unhappy and refused to eat.

The pit bull became the second pet in the family. Rocky actually raised the puppy, replacing his own parents.

Visitors to the shelter immediately noticed a cute red dog with intelligent eyes, and Rocky began to prepare for adoption. But something did not work out for the new owners, and they refused to take the dog away – to the great happiness of Shvabo, who could not stand the eternal separation from his friend.

Soon there was a longawaited reunion, and the former appetite and good mood returned to the pit bull. According to shelter volunteer Janie Bradford, the dog has changed beyond recognition. He was happy and calm next to Rocky. 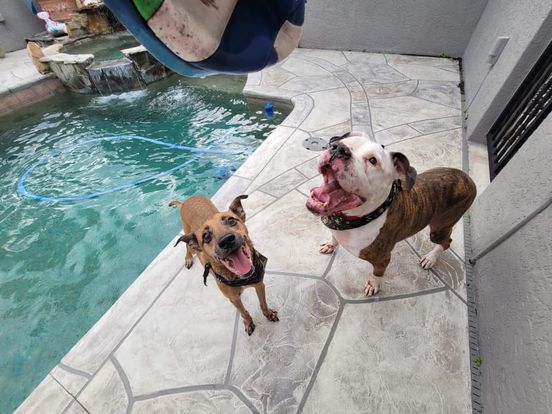 And although the dogs have completely different temperaments – the pit bull leads a measured, lazy life, and Rocky, on the contrary, loves active games – these two are very good together. Impressed by the history of dogs, Jenny posted their story on Facebook, and an employe of the DoghouseRescue akademy, a nonprofit organizationthat helps, treats, educates and find new homes for homeless animals, responded to it. The Foundation offered its assistance in finding a family that would agree to take two dogs at once, so that Rocky and Shvabo could always live together.