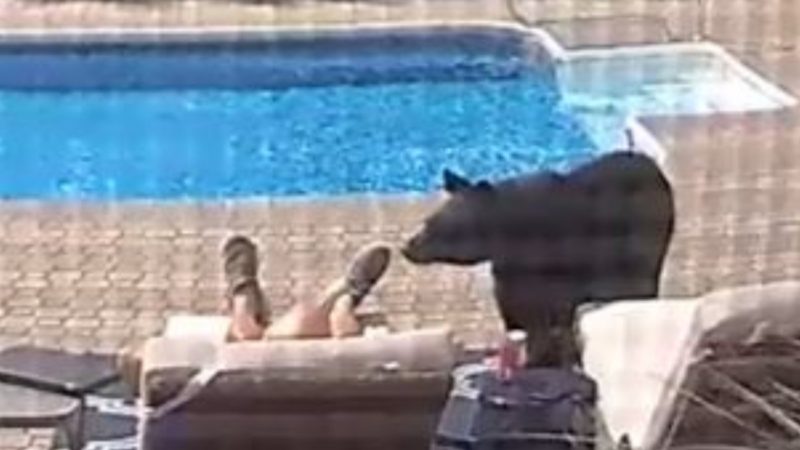 In mid-September, a Facebook user named Don Bit shared an interesting video on the network, taken in the courtyard of her house. Don’s husband Matt had dozed off on a sun lounger by the pool and was woken up by a curious bear intruding into their yard.

Apparently, the forest animal was hungry and looking for food. He drank a little from the pool and began to look around. Mishka did not immediately notice the man lying motionless, and when he realized that there was a living creature in front of him, he decided to make sure that it did not pose a danger. The shaggy predator sniffed and touched Matt with his paw – that’s where the man woke up. This beast did not expect and immediately rushed to his heels. Matt barely managed to grab the phone in his hands, but it was not possible to make good shots with the bear. Then the man remembered the camera on the wall of the house. Fortunately, a video of the incident was preserved on it.

When her husband told and showed Don what happened to him during the day, the woman could not believe her eyes. Infrequently before that they had to wake up from the touch of a wild bear! The couple can only be glad that the situation did not end in tragedy, and the hungry bear did no harm to Matt. And yet, according to the man, this is one of the most striking events in his life, which he will not soon be able to forget.