A harmless walk in the mountains ended with an emergency call of rescuers. But, fortunately, help arrived in time. A dog named Daisy went hiking to the top of Scafell Pike in England with his owners. She was so tired of walking that she just fell to the ground and refused to get up. No matter how hard her escorts tried, they did not succeed in moving the 55-kilogram pet.

Then they called the station of the mountain rescue squad and asked for help. Soon a team of 16 volunteers arrived on the scene. Daisy looked good, but because of the pain in her paws, she could not walk. Knowing that the weather in the mountains could change for the worse in the evening, the rescuers decided to urgently lower the animal from the top.

The dog became agitated at the sight of so many people, but soon calmed down and was able to administer painkillers. After that, the volunteers somehow loaded the heavy Saint. Bernarrd onnto astretcher and set off. Fortunately, the road was calm, and by the evening Daisy was at home. Here’s how it was:

The owners of the dog were very surprised and a little upset by this case. How could a St. Bernard, which was bred to save people in the mountains, get tired of an easy climb to the top? According to them, Daisy herself felt a little guilty and embarrassed about what happened to her. 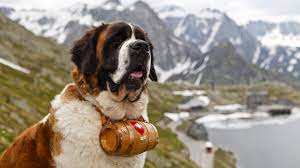 But no one is mad at her. The owners of the St. Bernard are glad that their pet remained alive and well, although they were a lot worried because of her condition. Henceforth, they promise not to subject the dog to such tests.